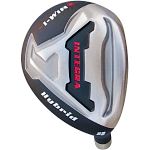 Add your own review


You are viewing 5-stars reviews (see all reviews)

Most useful first | Newest first
Scott
I own both the Integra I-Win single length irons and the Pinhawk single lengths as well. I love them both and decided to expand the sets with their respective hybrid options. After having played both brand hybrids for several rounds, I've decided like the I-Win hybrids a little better. I was a bit surprised as the Pinhawks are built on their own platform and it appeared as though Integra just copied the design of their Blue Angels hybrid to create the I-Win's. Well, clearly the Blue Angels are a great hybrid, because the I-Win's are spectacular. I get long, high, penetrating, straight shots. I could never hit a hybrid before, but these have changed that. A+ to Integra on these.

Disadvantages: None, really. Though they swing weighted out to a D-2, they feel a bit heavier. I like that, but some people may be put off by it.


Add your own review